Malaysia makes 3 out of 4 of the world’s medical gloves. The factories are operating at half capacity 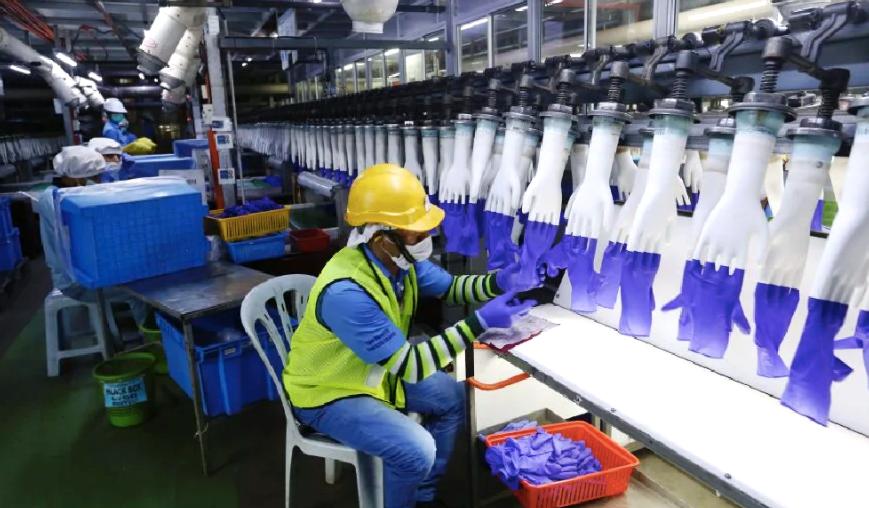 Malaysia's medical glove factories, which make most of the world's critical hand protection, are operating at half capacity just when they're most needed, The Associated Press has learned.

Health care workers snap gloves on as the first line of protection against catching virus from patients, and they’re crucial to protecting patients as well. But medical-grade glove supplies are running low globally, even as more feverish, sweating and coughing patients arrive in hospitals by the day.

Malaysia is by far the world’s largest medical glove supplier, producing as many as three out of four gloves on market. The industry has a history of mistreating migrant workers who toil over hand-sized molds as they're dipped in melted latex or rubber, hot and exhausting work.

The Malaysian government ordered factories to halt all manufacturing starting March 18. Then, one by one, those that make products deemed essential, including medical gloves, have been required to seek exemptions to reopen, but only with half of their workforce to reduce the risk of transmitting the new virus, according to industry reports and insider sources. The government says companies must meet domestic demand before exporting anything. The Malaysian Rubber Glove Manufacturers Association this week is asking for an exception.

“Any halt to the production and administrative segments of our industry would mean an absolute stoppage to glove manufacturing and it will be disastrous to the world,” said association president Denis Low in a statement released to Malaysian media. He said their members have received requests for millions of gloves from about 190 countries.

U.S. imports of medical gloves were already 10% lower last month than during the same period last year, according to trade data compiled by Panjiva and ImportGenius. Experts say greater declines are expected in coming weeks. Other countries making gloves including Thailand, Vietnam, Indonesia, Turkey and especially China are also seeing their manufacturing disrupted due to the virus.

Volunteers Keshia Link, left, and Dan Peterson unload boxes of donated gloves and alcohol wipes at a drive-up donation site for medical supplies at the University of Washington in Seattle on March 24, 2020. (Elaine Thompson/AP)

U.S. Customs and Border Protection announced Tuesday it was lifting a block on imports from one leading Malaysian medical glove manufacturer, WRP Asia Pacific, where workers had allegedly been forced to pay recruitment fees as high as $5,000 in their home countries, including Bangladesh and Nepal.
The CBP said they lifted the September order after learning the company is no longer producing the medical gloves under forced labor conditions.

“We are very pleased that this effort successfully mitigated a significant supply chain risk and resulted in better working conditions and more compliant trade,” said CBP’s Executive Assistant Commissioner for the Office of Trade Brenda Smith.

“Most of the workers who are producing the gloves that are essential in the global COVID-19 endemic are still at high risk of forced labor, often in debt bondage,” said Andy Hall, a migrant workers rights specialist who has been focusing on conditions in Malaysian and Thai rubber glove factories since 2014.

Since then, advocates like Hall say there have been improvements, including recent food handouts at some factories. But workers still suffer long, arduous shifts, and receive little pay to make medical gloves for the world. Most of the workers in the Malaysian factories are migrants, and live in crowded hostels at the factories where they work. Like everyone in Malaysia, they're now locked down because of the virus.

“These workers, some of the invisible heroes of modern times in fighting the COVID-19 pandemic, deserve much more respect for the essential work they do,” said Hall.

Gloves are just one of many types of medical equipment now in short supply in the U.S.

The AP reported last week that imports of critical medical supplies including N95 masks have sharply declined in recent weeks due to factory closures in China, where manufacturers had been required to sell all or part of their supply internally rather than export to other countries.

Rachel Gumpert, director of communications and membership services for the Oregon Nurse's Association said hospitals in the state are "on the edge of crisis."

"Across the board there’s not enough of anything," she said. They're mostly lacking adequate masks right now, she said, but “in two weeks we'll be in a very bad place in terms of gloves.”

In the U.S., concerns about a shortage have prompted some stockpiling and rationing. And some locales were asking for public donations.

In response, the FDA is advising medical providers whose stocks are dwindling or already gone: don’t change gloves between patients who have the same infectious disease, or use food grade gloves.

Even with adequate supplies, the agency said that under present circumstances: “Reserve use of sterile gloves for procedures in which sterility is required."

Last week an Italian doctor died after testing positive for novel coronavirus. In one of his last interviews, he told broadcaster Euronews he had had to treat patients without gloves.
“They have run out,” he said.